The Union Quilters by Jennifer Chiaverini 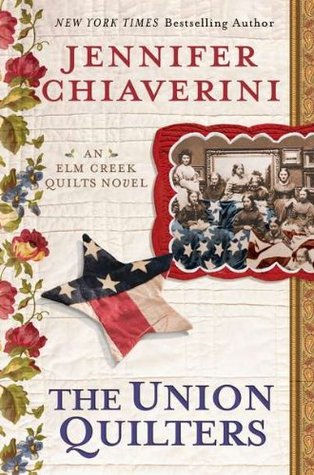 From Goodreads: In 1862 Water’s Ford, Pennsylvania, abolitionism is prevalent, even passionate, so the local men rally to answer Mr. Lincoln’s call to arms. Thus the women of Elm Creek Valley’s quilting bee are propelled into the unknown. Constance Wright, married to Abel, a skilled sharpshooter courageous enough to have ventured south to buy his wife’s freedom from a Virginia plantation, knows well her husband’s certainty that all people, enslaved and free, North and South, need colored men like him to fight for a greater purpose. Sisters-in-law Dorothea Nelson and Charlotte Granger wish safe passage for their learned husbands. Schoolmaster turned farmer Thomas carries Dorothea’s Dove in the Window quilt with him. Charlotte’s husband, Dr. Jonathan Granger, takes more than a doctor’s bag to his post at a field hospital. Alongside the devotion of his wife, pregnant with their second child, Jonathan brings the promise he made to his unrequited love, Gerda Bergstrom: “My first letter will be to you.”

Together with the other members of the circle, the women support one another through loneliness and fear, and devise an ingenious business plan to keep Water’s Ford functioning. That plan may forever alter the patchwork of town life in ways that transcend even the ultimate sacrifices of war

My Thoughts: Right away The Union Quilters struck me as more of a stand alone historical fiction novel then an Elm Creek Quilts novel. Since I love historical fiction this is just fine (and lovely, and perfect) by me! If anything I would compare this book to The Sugar Camp Quilt by Chiaverini (hands down my favourite book in the series) as it wasn’t quite as light as the other Elm Creek Quilts books. The actual quilting theme was secondary in this novel and I found that the story really was focused upon the various battles in the civil war, the ones fought on the battlefield and off.

I found the story surrounding Able and Constance Write to be particularly interesting. Able was a free-born man in the North of the Union and Constance had been born into Slavery in the south having had her freedom purchased by Able. Able was desperate to fight for the union cause but was denied the opportunity time and time again. Constance was torn between supporting her husband’s desires to fight for the union and her need to have him safe at home with his family.

Another dynamic that I found to be complex was the relationship between Anneke and Hans. Hans being a staunch pacifist and Anneke a devoted Unionist who could not understand nor accept her husbands beliefs. She felt guilty and ashamed that while her friend’s husbands were fighting and dying for the Union, and while others like Able wanted to badly to fight for the cause but couldn’t, her husband was safe at home by his own choice.

The women who eventually formed The Union Quilters were deeply loyal to the Union cause and use their quilting ability to raise money for their local regiments and veterans as well as to supply quilts to various field hospitals. As much as it was a historical fiction novel about The Civil War, The Union Quilters was also a story of female strength, and the impact of war on those left at home. Many fans of the Elm Creek Quilts novels have complained that this book missed the mark but I think the opposite. The Union Quilters by Jennifer Chiaverini paints a sometimes horrifyingly vivid picture of the social context surrounding The Civil War and how women (many of them quilters) used their talents to support the Cause as well as the men who fought for it.

I received a free copy of The Union Quilters from Penguin Group (Canada). I was not required to write a positive review and all opinons are my own.