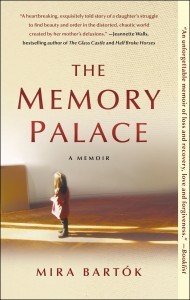 From Goodreads: “People have abandoned their loved ones for much less than you’ve been through,” Mira Bartók is told at her mother’s memorial service. It is a poignant observation about the relationship between Mira, her sister, and their mentally ill mother. Before she was struck with schizophrenia at the age of nineteen, beautiful piano protégé Norma Herr had been the most vibrant personality in the room. She loved her daughters and did her best to raise them well, but as her mental state deteriorated, Norma spoke less about Chopin and more about Nazis and her fear that her daughters would be kidnapped, murdered, or raped.

When the girls left for college, the harassment escalated—Norma called them obsessively, appeared at their apartments or jobs, threatened to kill herself if they did not return home. After a traumatic encounter, Mira and her sister were left with no choice but to change their names and sever all contact with Norma in order to stay safe. But while Mira pursued her career as an artist—exploring the ancient romance of Florence, the eerie mysticism of northern Norway, and the raw desert of Israel—the haunting memories of her mother were never far away.

Then one day, Mira’s life changed forever after a debilitating car accident. As she struggled to recover from a traumatic brain injury, she was confronted with a need to recontextualize her life—she had to relearn how to paint, read, and interact with the outside world. In her search for a way back to her lost self, Mira reached out to the homeless shelter where she believed her mother was living and discovered that Norma was dying.

Mira and her sister traveled to Cleveland, where they shared an extraordinary reconciliation with their mother that none of them had thought possible. At the hospital, Mira discovered a set of keys that opened a storage unit Norma had been keeping for seventeen years. Filled with family photos, childhood toys, and ephemera from Norma’s life, the storage unit brought back a flood of previous memories that Mira had thought were lost to her forever.

My Thoughts: The Memory Palace is Mira Bartok’s haunting memoir of what is was like to grow up from the age of six with a severely mentally ill mother whose schizophrenia dominated every aspect of her life. Mira wrote of the things that she and her sister witnessed and heard as a result of her mother’s illness. This memoir was at the same time disturbing and poetic. It was as much a story of strength and determination as it was of hardship and pain.

I was struck by how the author continued to care so deeply about the woman who because of her erratic and dangerous behavior forced her daughters to change their names and hide their whereabouts. Mira kept in regular contact with her mother by writing through a P.O. box and was deeply concerned about her well being. The amount of guilt that Mira felt about leaving her mother was shocking to me and one of the most powerful moments in the book for me was when she wondered if her mother would forgive her for leaving – as if she was the one to cause the hurt.

The ending of the book really stayed with me. In the last weeks of her life Nora was placed in a nursing home and Mira and Natalia kept vigil by her bedside. Mira wrote of how she had been shopping for 17 years for clothing that could be layered to keep her mother warm on the streets and now she shopping for her mother for the last time ever buying pretty nightgowns. That statement alone really summed up for me how she felt about her relationship with her mother.

The Memory Palace is an exquisitely written memoir that explores the strength of the relationship between mother and daughter. I was surprised by much of what I read but mostly how a young girl could remain so strong and still be compassionate towards the woman who made her life so difficult. Mira did a fantastic job of not only bringing her own life and struggles to light but also of realistically illustrating her mother in a way that the reader could almost see and feel this woman. By including selections of her mother’s writing in the memoir we are given an incredibly intimate look at how Norma’s mind worked and the fears and delusions she had.